So why do we love Impi so much?

Well it is a very safe boat. The underside ‘nacelle’ – a large bullnose protruding between the hulls toward the trampoline area tapers, in what I can only describe as a ‘third suspended hull’. Do not think Lagoon build this in as a beautiful looking feature, for it certainly is not – it is undersold and holds a phenomenal ‘secret’ to safety at sea. Let me explain.

We were sailing around the southern tip of South Africa when a storm descended upon us. The waves were breaking to the extent that the surface became filled with foam and soon we were dropping down these colossal monsters doing 17 knots bare poles. Every other catamaran there had to head out to sea, since dropping down these waves would see the bows dig into the back of the wave ahead and they feared pitch poling. Impi was the only boat to successfully round the Cape that day for shelter in the anchorage – why?

We soon learned the magic trick of Lagoon. As the bows descended into the wave ahead, that ‘bull nose’ of the nacelle would make contact with the water surface driving the bows upward, time and time again. The suspended hull effect would assist with keeping the boat steering straight down the wave, where catamaran skippers fear the boat broad siding down a wave face. This feature alone ticked a huge box for us, a major point of safety that was going to prove to be invaluable in some pretty ferocious storms we would encounter crossing many oceans of the world. 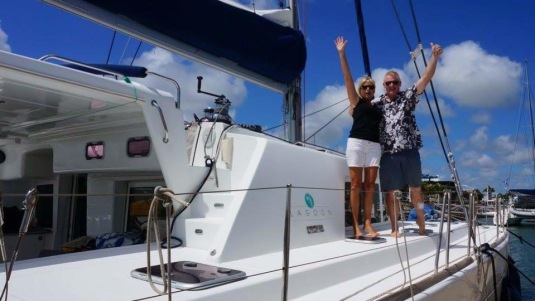 Word of the Year: Fake News 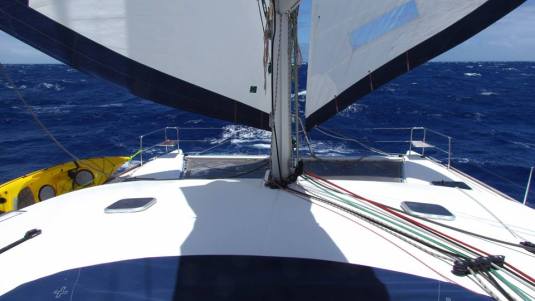 SAILING WITH A SYMMETRICAL SPINNAKER WITHOUT A POLE ON LAGOON 440 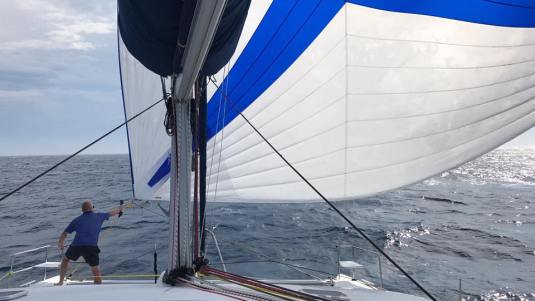