And so Moose’s story has come to an end with the placing of a plaque commemorating him.

The words on the plaque, which took weeks of negotiating, are very nice of course and write the closing lines on a story that speaks to lots of hearts. However, there is a sub text that remains unspoken and which causes unease not just in our heart but also in the hearts of those who loved and cared for Moose.

Why did this dog live alone on an island? Why did it take an international yacht supported by a worldwide community to help him when he was ill? Why did all veterinary surgeons apart from one refuse to treat the dog even though we offered to pay them by the hour?

Why did an Australian sailor, Stuart Oliver, generously pay for the plaque and its support? Why did the New Caledonian news reporting on the history of the island failed to see the opportunity to highlight the plight of animals in New Caledonia?

Why were Moose’s remains thrown in the sea and not taken to his veterinary so that a cause of death could be established? Why could Moose not be cremated and his ashes buried on his beloved island?

Well we may not have the answers to all of these questions but I want to share with you some facts. I would like to start with the story of Captain John Oliver himself.

It took Stuart Oliver 60 years to retrace his great–great-great grandfather’s steps. He was always told his ancestor was lost at sea but this was not the case. In his research Stuart came across a John Oliver who was mentioned in the archives of the Cercle Celtique of Noumea. However, nobody knew where he was buried.

This was only established with the help of the maritime pilots who pointed out that the grave was located on Ilot Casy as seen on the photo above with Impi moored in front of the dock. After some serious health concerns Stuart was finally well enough in August 2018 to place a plaque commemorating his ancestor. 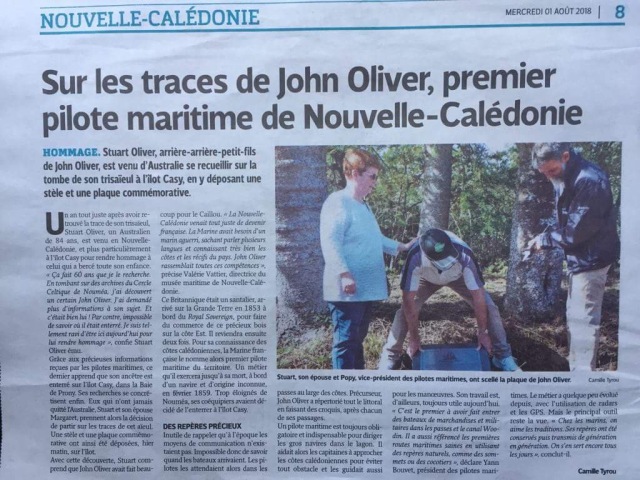 It became apparent through research that John Oliver was a sandalwood trader who arrived in New Caledonia in 1856. He knew the Southern lagoon and Eastern coast very well and spoke several languages, which led to him being the first maritime pilot appointed by the French Government in 1856. He would bring in military and commercial ships to Port de France, now Noumea until his sudden death on La Thisbe. His child was the first child of European descent born in New Caledonia, which caused no end of consternation in the archives… le premier enfant blanc en Caledonie, c’est un anglais!  The first white child born in Caledonia, it is an Englishman!

It remains unclear as to why John Oliver was not buried in Port de France. The cause of death was reported as a sudden death, possibly a cardiac arrest.

The maritime pilots used hills, reefs and islands to guide the big ships safely into the harbor and to this date we see the first maritime pilot’s name on the current charts of New Caledonia e.g. Basse Oliver.

We learnt that Stuart received the link to one of our movies so that he could see for himself where his ancestor was buried and in doing so he came across Moose’s story. Like most of us, he started loving Moose and came to see him as his ancestor’s guardian.

Moose was born on the island as part of a litter of 11 pups and was taken to Noumea as the resort on Ilot Casy closed. Sources tell us that he barked and cried the whole time and was unmanageable in the town, therefore he was taken back to the now uninhabited island where he lived alone for 14 years. He was fed occasionally and hunted for rats, fish and crabs to supplement his meager diet. Local people and international boats would visit the island and feed him too.

Moose would usually wait on the dock and after feeding would take you for a walk around the island. We were introduced to him by our New Zealand friends Rob and Carolyn. We documented how he lived and many people could not understand how we could leave him when we left to spend cyclone season in New Zealand.

Upon our return to New Caledonia a year later, it was clear that something was very wrong with Moose. He was emaciated, he was limping, his eyes were cloudy and he cried when you stroked his ear. As soon as he saw our boat he jumped in the water and swam over desperate for human help.

Thanks to our followers on Youtube money was raised to pay for a vet. However, every single veterinary refused to come to the island to treat Moose. Their excuses ranged from, no time, to too politically dangerous. We were also told by Protection du Lagon, environmentalists who look after the lagoon’s ecosystem, not to remove the dog from the island, as he becomes very aggressive.

This left us in an impossible situation that deeply troubled us. Finally after talking to Protection du Lagon, we got via Facebook in touch with Guy Kane who was travelling in the US and who upon his return to Noumea, agreed to fly over to the island and treat Moose. He established that Moose had heartworm, an ear infection and arthritis. His eyes were affected by electric ants whose poison had cloudied his eyes. 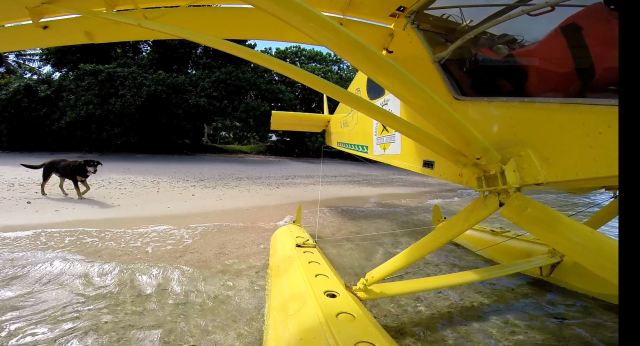 The social media community continued to sponsor Moose’s care and locals and international sailors would take him food and medicine. This was coordinated by his vet via a Facebook page.

Sadly Moose grew old. He became less and less able to guide visitors around the island and he passed away in December 2017. His remains were thrown in the sea which saddens us deeply as there was no opportunity to establish the cause of death or to cremate him so that his ashes could be buried on the island.

Finally, a bit of past explorers wisdom to motivate us to carry on….

It has now been reported to us that gossip on the island blames us and his vet for Moose’s death by over medicating him. It deeply saddens us and it is unclear to us as to why people would choose to spread such malicious gossip.

Maybe it is because of course it is deeply embarrassing that the international community has to help with animal welfare on an otherwise wealthy island. Maybe it is to do with a lack of care and compassion in traditional societies.

All we know is that we follow in the footsteps of Lapérouse, this famous French 18th century navigator, lost in the Solomon Islands, when he said that :

‘The sole purpose of modern navigators , in describing new cultures they encounter, is to finish the story of humankind. Their navigation activities should complete our knowledge of the globe and the Enlightenment they hope to spread should be only to make the Islanders they encounter happier and to improve their means of achieving the necessities of life .’(Lapérouse- Voyage autour du monde)

In our view looking after our animals is one of the main traits of humankind and assisting in developing this amongst the islanders a duty.

The sterilization program on Ile des Pins was due to continue with a new project in September. However the mayor of Ile des Pins has refused any further sterilisations, instead insisting that all dogs walking around freely, healthy or not should be killed.

This saddens us and of course we have withdrawn our support for such a mission.  Instead we are turning to the Loyalty Islands where thanks to Guy Kane, Marie Orsario (BienEtre Animal – Societe Protectrice des Animaux), the Down Under Rally as well as donations to our program Help Us to Help Animals, sponsored by YOU, we will tackle a first project on Ouvea.

We would like to make it clear that in the words of Lapérouse;

‘If personal sacrifice could be compensated for by other advantages, I could not ask for anything more. But a promotion in rank, even some degree of fame, contribute nothing to one’s happiness.

I shall make every effort to ensure that the inhabitants of the islands we might visit will never be sorry for having welcomed us.’ (Letter written to a friend by Lapérouse before his departure )

That is what makes us happy.

Stuart and Margaret Oliver for sharing their story and for sponsoring Moose’s memorial;

The pilots of Noumea and the Circle Celtique de Noumea;

The staff and curator of the Maritime Museum in Noumea;

Guy Kane and his assistants at the surgery in Motorpol;

John and Leanne Hembrow of Down Under Rally Australia;

All the people who sponsored Moose and the Help Us to Help Animals program;

All sailors, international and local who came to visit Moose;

Marie Orsario and the Society for the Protection of Animals;

Isabella Lico for her standfast support and encouragement;